After growing up in Maine, I decided to go to Virginia Tech in Blacksburg, VA for college. AKA, middle of nowhere Virginia. It was great, I was really excited. Started meeting many of my new friends on the hall and the conversations basically went something like this:

“Wow! Do you play basketball??”


True story. But, even growing up a stone’s throw away, never been there. Been to Mexico twice, Europe twice, Australia… Never the 4 to 6 hour drive to Canada.

Megs and I rolled out of the Plattsburgh, NY Walmart parking lot bright and early this morning. Our destination, Canada! Quebec City to be exact. A half an hour later we neared the border and were greeted by a sign that read “aciremA fo setatS detinU”… I giggled and we pressed on to the border station. Everything went smoothly until we got to the weapons portion of the examination. Apparently mace is not allowed in Canada… We had to pull over and Megs had to go in and sign a form telling her that they we going to dispose of it. Just think of all the damage we could have done with that little bottle!!!

But they let her in and all was well! 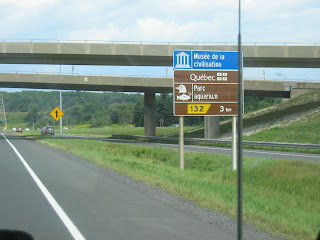 We were excited! Ready to explore a whole new country!!

Instead we spent the next two hours travelling through flat farmland which seemed awfully similar to anywhere else in the US, except with slightly smaller trees… Botany lesson for today: Less sunlight, heat, and moisture = smaller trees. They probably aren’t all that much smaller in southern Canada, but humor me here… I was grasping at straws. We saw exactly 1 mountain off in the distance for the whole 2 hour drive. And besides the fact that everything was written in French, it coulda been anywhere… 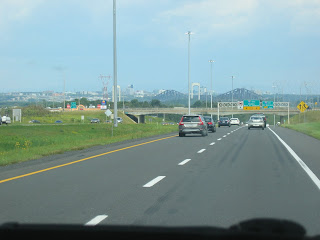 We arrived at our campground accommodations for the night, Camping Juneau-Chalets, about 15 minutes outside of the city on Lac St. Augustine. Really nice place actually. All the accoutrement you could ask for in a campground, and they had a free shuttle to the city!! Bonus. So we took a little time to hookup the power and water. Grabbed some lunch and then went out to catch the 14:15 shuttle. The last one back would be at 19:00. 4 hours in the city, perfect.

So the shuttle pulls up to the office and the first thing you see is a gigantic frog saying “Benjo” on the side of it. Taking this in stride, we board the bus to find glass cases filled with action scenes built from legos, the ceiling completely covered in an ad for toy dolls, and stuffed animal frogs everywhere… Weird… We start off and seem to take the longest route possible, hitting just about every red light. 45 minutes later we get dropped off in what is supposively Centre-Ville. Right next to a huge toy store called Benjo! At least now we know why the shuttle is free… We were riding in a huge advertisement! Can’t complain though, it got us here…

Or did it? Where exactly is, here? We had no clue, as neither of us had bothered bringing a map. And my failed attempts of French at the campground were enough for us to decide, meh, we’ll just figure it out. That direction looks good…

And it worked out fine. Our strategy was to basically just walk up the hill until we got high enough that we could see which way to actually go. In a place like Quebec though, that’s a lot of hill!! It basically was built on a cliff! But we got up to the top, got oriented, and even found a map. Expert world travelers… 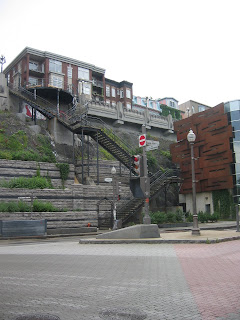 For the next three hours we pretty much just wandered our way throughout the entire city. There are a bunch of newer government buildings above the Old City. Statues and memorials everywhere. 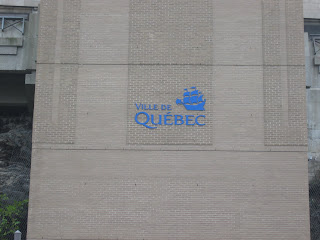 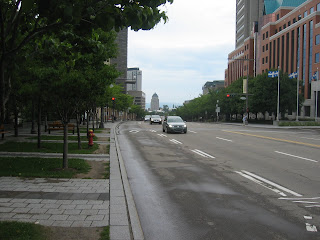 The ramparts for the old city are still standing so we entered through one of the gates, which was pretty cool. 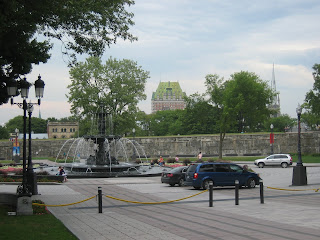 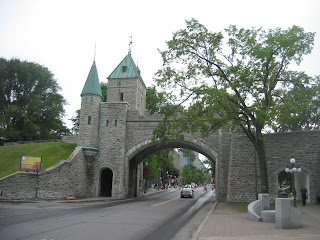 Then we wandered down through the main center of the city to a boardwalk overlooking the river far below. 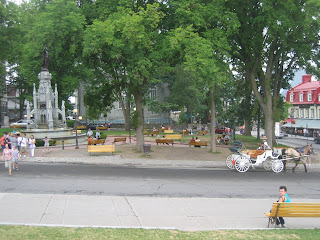 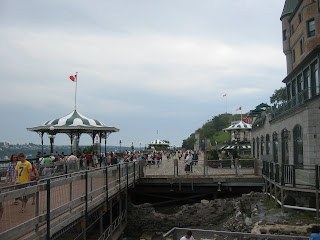 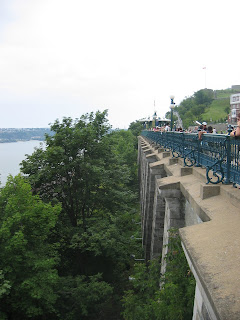 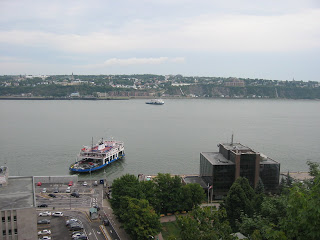 Apparently the boardwalk covers the ruins of the old chateau which burned down in the mid 1800s. 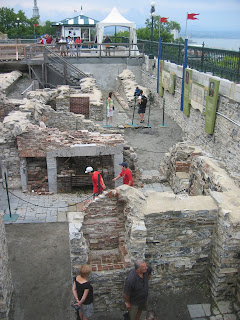 But they built another one in the next century, even though it still has something of a modern look to it. 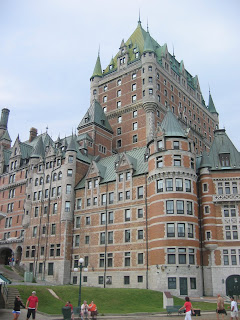 Then we continued our wanderings through lots of neat little neighborhoods. 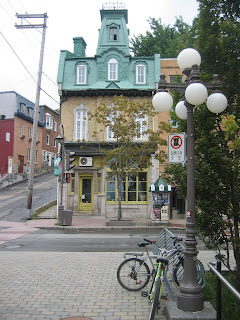 Until we ended up all the way down by the river itself! 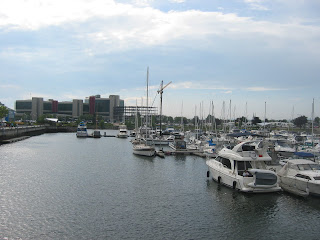 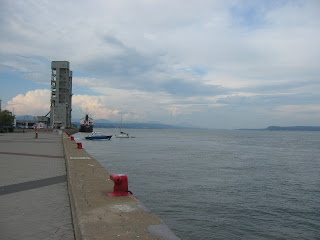 Finally, exhausted, we found our way back to the toy store and rode back to the RV. Even in the short amount of time there, we found Quebec to be an awesome city. Reminded us both of the European cities that we love. Just the architecture, attention to detail, and general vibe of the place is really similar to its’ European counterparts. Plus the whole French thing helps too I suppose… In our few hours of walking around we really got a great feel for it and made some notes about where we want to visit in more detail tomorrow! 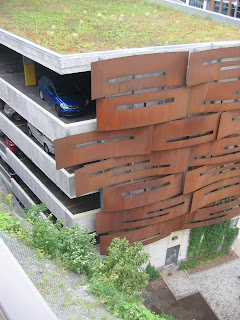 Maybe I’ll even attempt to talk to some people a bit tomorrow… Maybe.

- In fairness to Canada, we were driving on the highway the whole way through to Quebec… I think we have found a better scenic route to take when we head down towards Montreal.

- After only a few days off the grid, being plugged in to power and water for the night seems like a huge luxury! We cooked our first prepared meal of the trip. Spaghetti and Chicken. Megs had some veggies. I pretended like I was going to eat some green beans but then forgot too… But we both had a glass of milk! Meh…

- After all our fear about the remoteness of Canada, it’s not. Our phones work, as does, obviously, the broadband. We are probably paying extra for them though… We also passed a Walmart on the way to the campground. Oops. Whatever, we had to experience the campground life at some point, and not having to find parking for the RV in the middle of a city is pretty sweet too…

- My French isen’t as bad as I make it out to be… I can pretty much understand anything that is written out, and even, for the most part what someone says to me if they speak slowly enough. But speaking it myself? Ugh. I probably sound like a 4 year old kid with an unusually deep voice…

-  A special shout out to my gf Sara because I know she will be the  very first to read this post.  Love you and Miss you!!
Posted by Hightower at 11:43 PM