Over 23 years ago, my parents bought a quarter acre piece of waterfront property on Lake St. George in the tiny town of Liberty, ME. At the time we were living in Topsham, ME and they wanted a place where we could easily get away from our lives of work, work, and school for me. In true Maine fashion, they only found the place when they got lost looking for another property and our future neighbor came crashing out of the woods and, in an incredibly thick Maine accent, asked my parents if he could help direct them. Ray Banks then proceeded to convince my parents that what they actually wanted to do was come and take a look at this secluded little piece of property right next door to his lake home, which he shared with his wife Pearl. Apparently there had been a couple from Connecticut interested as well, but Ray and Pearl felt a nice young Maine family would be best. From that day we have been close friends with Pearl and Ray, until his passing. We couldn’t have gotten to this point without them…

When we bought Camp, it was a sloping piece of land with three flat levels. From the water there was a shoreline strewn with rocks, up to a grassy level ringed by trees. Slopping up a bit further to a intermediate level that also served as access to the Banks’ property on one side and the adjoining camp on the other. Originally that other camp shared our access road with us. Those neighbors used to be pretty boisterous and just about every one of their friends had a motorcycle. There are multiple great stories of my Dad chasing after motorcycles that had peeled out past us late at night. On the Banks property side, there was a stream that created the boundary, as well as countless hours of enjoyment in my youth. Finally the land sloped up to an open area perfect for parking our sweet Dodge Ram van that was converted so that my parents could sleep in the back, me in the middle seat, and my sister Megs across the two front seats on a makeshift mattress.

A dock and raft were added in the water. A couple trees cut down at the water’s edge to improve views. The rocks at the shore organized into stepping stones. A stone ringed fire pit installed in a corner of the grassy level, and a screen house platform in another. Small gardens were added ringing the grassy level as well. Thankfully our neighbors created their own drive from the main road. A swing set was added to the intermediate level as well as a new bridge over the stream so we could more easily go visit. And with all these changes, the lower levels of camp became basically what they are today. 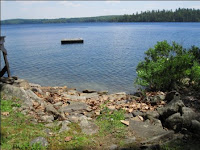 Perhaps 16 years or so ago, we had a little bit of money so we cleared out the parking level and built a septic tank, and foundation, complete with a good sized deck attached. Ray Banks, knowing everyone who was anyone, acted as our general contractor and added the lonely deck to this initial phase because he knew that if we had added it later, that would count as our once lifetime allowed addition to a home on waterfront property. He also let us build a leech field slightly further up the hill on his land for a dollar. No big deal. Incredible. We upgraded our accommodations to one of those sweet silver bullet trailers that we got from my grandparents, and parked it up on the leech field overlooking Camp. Technically the Banks’ property, but again, they are amazing.

5 or so years later, and a bit more money, we finally added a house on top of the foundation. Although it was just a shell, no insulation or even drywall to speak of. No power or plumbing. A port-a-potti in the bathroom and blankets on studs for walls. Over the next 12 years we spent our time at camp in this house. We filled up water bottles from Pearl Bank’s spicket. Eventually got basic electricity so that we could have a stove and refrigerator and whatnot. But we still had to empty the port-a-potti by hand into the septic system, and we could obviously never visit during the winter… But we made do because just being here was worth it. 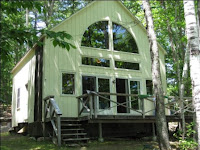 Well finally, Camp is being finished. Being an architect, I drew up the plans. Ma put together a massive book of details and specifications. We officially bought the leech field and access road so that we now have a full acre. We hired a contractor and construction is underway!!! To this point, a 6’ addition has been extended off the back of the original shell, and work has begun on the final room configurations inside. In the end, we will have a year round home with all the usual amenities, and which can be used anytime our hearts desire. Ma plans to move in when she finally gives up her crazy work life. Although her plan as of now is to live here through about January when the winter generally gets unbearable. She will then escape to stay with friends in the south, before returning the end of May to do it all over again. Her years down in VA have made her a bit soft to the good Maine winters… 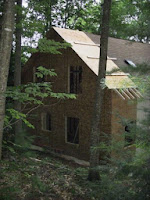 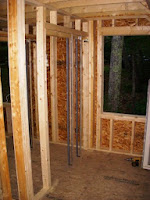 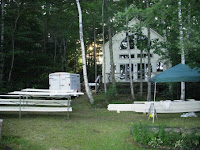 So there you have the history of Camp. With all the changes to it over the years, the one constant has been our love for the place and our desire to be here as much as possible, regardless of the accommodations.
Posted by Hightower at 10:39 PM